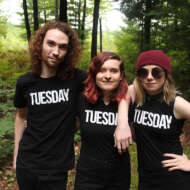 The Accidentals
This user account status is Approved
About
Music
Videos

This user has not added any information to their profile yet.

Texas Lifestyle Magazine chose The Accidentals as the “band to see” at Austin City Limits, SXSW, calling them defiant, young – powerful, and undaunted.”

In 2019 they released a self titled LIVE album and a single with New West Records, and toured the UK. They scored an indie film, and taught workshops across the country. The band toured 150 dates, including backing up Keller Williams, Gabriel Kahane, and Martin Sexton on strings. They wrapped 2019 as guest artists with the TSO Orchestra on original pieces they scored and arranged.

They just released a collaborative single with the Contemporary Youth Orchestra and The Rock Hall of Fame on record store day in April. They are working on finishing their much anticipated studio Album, Vessel, co-produced by John Congleton (St. Vincent, Lana Del Ray) and Tucker Martine (Nico Case, Decemberists).

Pop Matters Magazine say’s, “you can’t define the Accidentals by comparison to any one band”, comparing them to a mash up of influences including, “Decemberists, Avett Brothers, Beatles, and Brandi Carlile.

NPR calls them “some of the most compelling songwriters of our time”.

Their music can be found online, all the streaming platforms, Barnes and Noble, and at their shows. Show schedule can be found at Bandsintown and on their website at www.theaccidentalsmusic.com